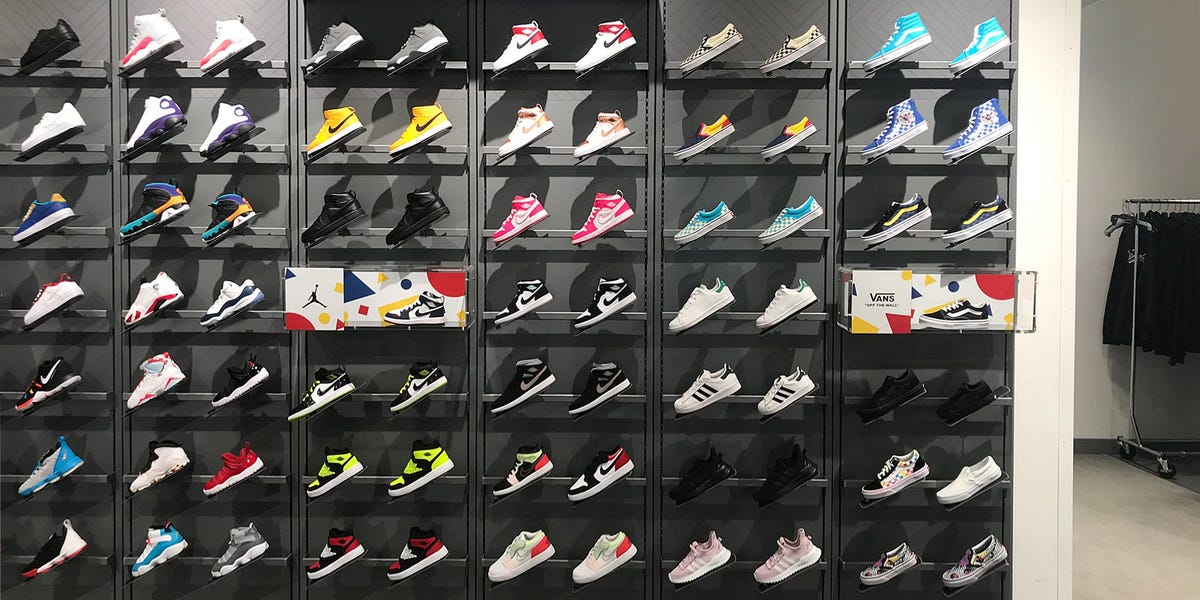 For years, Nike and Adidas dominated the sneaker walls at shopping malls and sporting goods stores.

As Nike pulls back from some of its biggest retail partners and focuses on direct sales, it’s opening up shelf space for competitors. Wall Street analysts who spoke with Insider said that means several upstarts could be filling more shelves next year.

“You have a lot of brands that have had a very narrow distribution but are rapidly growing their brand awareness and are now expanding into bigger retailers that will give these brands so much more visibility,” Wedbush analyst Tom Nikic told Insider.

“There are so many more doors they can go into”

Hoka, which is owned by Deckers, historically has been sold at running stores. But that’s changing.

“They entered Dick’s Sporting Goods one or two years ago, but they’re still in less than 20% of Dick’s doors,” Nikic said. “They just entered Foot Locker over the summer and are only in a small slice of their massive store footprint. They’re not in Academy Sports, the second-biggest sporting goods retailer in the country, they’re not in Finish Line yet. There are so many more doors they can go into, which should cause the brand awareness to keep growing and growing.”

Nikic said On and Hey Dude could follow similar trajectories next year.

“We came away from our meetings confident that the Crocs brand will realize its 2026, $5 billion revenue target, and that Hey Dude, if managed well, which we expect, has sales opportunities that exceed that of Crocs,” Poser wrote.

Nikic noted Crocs already is sold by a lot of retailers, which could help get Hey Dude on shelves everywhere from family footwear stores to Foot Locker locations.

Lululemon launched its footwear line this year. It exceeded the brand’s expectations.

“Keep an eye on Lululemon’s nascent footwear business,” Nikic told Insider. “They’re planning a slow, cautious ramp-up of that business, which just launched nine months ago. But as one of the few ‘female-first’ sneaker brands out there, they have potential to make a lot of headway in the category by serving a demographic that might feel under-served by the broader sneaker industry.”

“They have a long way to go,” she said, noting how rivals like Nike and Adidas have decades more experience making performance sneakers.

But she continues to be impressed with the brand.

“Lululemon is just one of those retailers that continues to deliver,” she told Insider. “The execution has been there.”

In 2017, Nike announced its Consumer Direct Offense, which focuses on direct sales. In 2020, Nike ramped up the effort, renaming the plan the Consumer Direct Acceleration.

As part of the focus on direct sales, Nike cut 50% of its wholesale accounts since 2018, splitting with thousands of retailers and pulling back products from others, including Foot Locker. That’s opened up shelf space for more brands.

But that dynamic is changing. Nike’s no longer cutting accounts, and it’s working more deeply on connecting its inventory with a handful of partners, reemphasizing the importance of its wholesale partners.

That includes Mary Dillon, the new CEO of Foot Locker. In September, Nike hosted its wholesale partners at its Oregon headquarters for the first time in three years, CEO John Donahoe said on a December earnings call.

“This quarter, we spent a lot of time with Mary Dillon and her team at Foot Locker,” Donahoe added. “There’s a lot of excitement, I would say, with our wholesale partners and what we can accomplish together.”