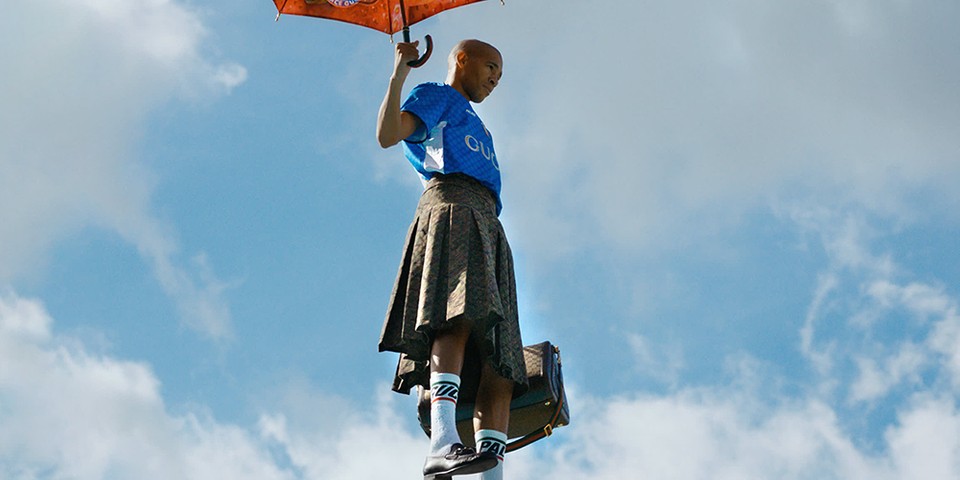 It’s official: Gucci and Palace are collaborating. Teased earlier this morning with a video filmed by Max Siedentopf, who combined reality with the unexpected in a campaign soundtracked by The Prodigy’s 1992 single “Out of Space,” as well as a host of campaign imagery, we now have a closer look of the upcoming collaborative collection courtesy of Gucci Vault.

Described as being “Guccier than Gucci,” the comprehensive range expertly merges the language of the two collaborators while also welcoming Palace’s debut women’s ready-to-wear designs alongside a largely unisex array. The power of logos infiltrates much of the selection, working the “GG” motif alongside Palace’s Triferg for something unmissably identifiable and instantly iconic in the world of streetwear. In recent months this has been at the forefront of Gucci’s delivery, working with adidas to create yet another momentous occasion in fashion that saw the Alessandro Michele-helmed house reference his own historical cues alongside the Three Stripes’ and Gucci’s archives for Fall 2022.

But for Palace’s collaboration, things are taken up a notch with a sensibility, and references, that only Palace could deliver. In the collection, we find a customized MOTO GUZZI V7 motorbike, a GG-P Supreme safe box (nodding to the fact this collection will only be available via Gucci Vault), printed silk pillows, and more.

However, it’s the clothing that truly stands out. Kicking off with the star of the show, Palace Gucci offers a leather biker jacket and matching leather pants washed with a vintage aesthetic and decorated in Italian sports motifs, while other outerwear includes the shearling jacket with all-over “GG” embossing and a faux-fur-fitted denim jacket that’s adorned with crystal studs.

The witt and cleverness behind the collaboration continue to grow as we get deeper into clothing and accessories. Palace signatures, like its hoodie, sports a Gucci-fied Triferg logo, while the Triferg coin pouch is also done up in Gucci’s house monogram. Printed football jerseys ooze Italian ’80s casual nostalgia, while ringer T-shirts complete with graphics that wouldn’t be mistaken for something taken from the Italian publication Toiletpaper Magazine make another archival-inspired debut.

Elsewhere, nods to Tom Ford-era Gucci and the early noughties come strong with the womenswear, as canvas monogram miniskirts are finished with crystal-embellished Palace and Gucci-branded thong staps. Triangular bikini tops and patent leather tote bags continue this energy, while bootcut jeans, kilts, bucket hats, umbrellas, GG-P patterned baggy skater boy jeans and more come together to represent the archival influences Michele pulls from, all while referencing much of Palace’s own work.

Bringing the capsule together are cozy staples like a wool jacquard knit bomber adorned with tiger graphics and a checkered shirt with dragon embroidery, thus leaning into Y2K skateboarding tropes that Palace frequently riffs off, and of course, there’s a strong array of shoes.

Here, Palace takes the house’s quintessential Horsebit Loafer and delivers it in black leather with “P” emblems dangling as charms from the Horsebit, as well as louder takes including ones covered in a dual-branded graphic canvas in brown, tan and pink colorways. Webbing slides bear the Gucci colors alongside Palace’s branding, while a final flurry of belts, an AirPods case, and card holders round out the upcoming drop.

Take a closer look at every item dropping from Palace Gucci in the gallery above. It will be available exclusively through Gucci Vault, which will also be turned into a physical format through pop-up stores in Paris, Milan, Tokyo, Osaka, and Bangkok, as well via takeovers of Palace stores in London, New York, Los Angeles and Tokyo.

In other news, Raf Simons took to London to present his SS23 collection last night.

One thought on “Every Item Dropping From Gucci x Palace”