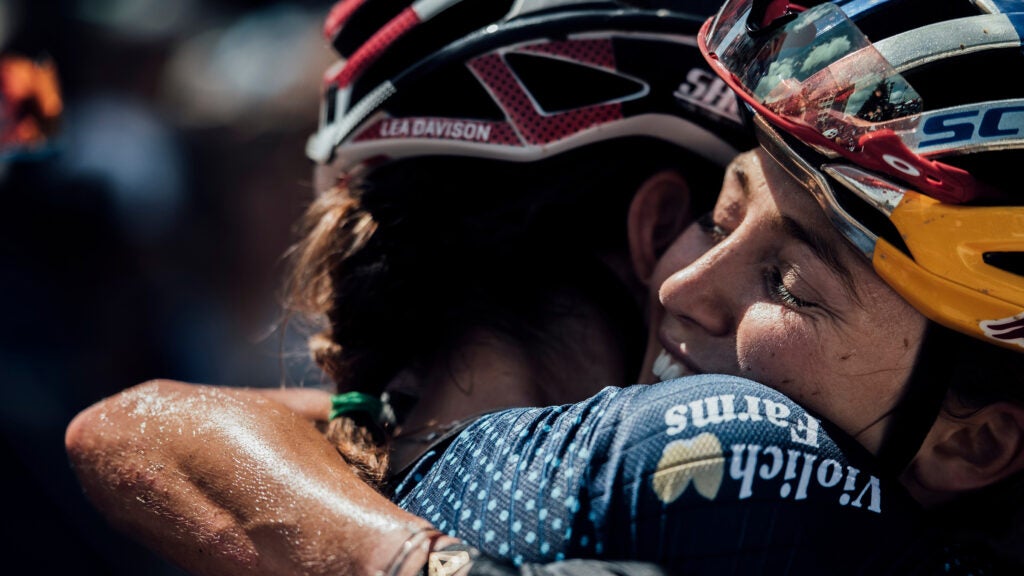 This article was first published by Pinkbike.com.

A year later, I was given the opportunity to become Lea’s teammate and jumped at the chance. I signed with Specialized and over the next five years, Lea and I became inseparable. We pre-rode courses together, planned adventure rides between races and slept about six inches apart in tiny European hotel rooms in twin beds we could barely separate. For me, traveling and training with one of my idols was a dream come true. But looking back, I am amazed by how warmly and wholeheartedly Lea invited me in and took me under her wing. The experiences we shared and lessons I learned looking up to Lea have had a profound impact on my life and career.

Of all of the experiences I have shared with Lea, one in particular stands out. It started at the beginning of the 2016 Olympic season when Lea sent me a package in the mail with a little note. It was a Nike T-Shirt with the Olympic Logo on it from her time in London. “2012 Olympic Team” was typed out in a white font inside a red circle around the Olympic rings. “This can be you,” Lea had written in the note. I wore that shirt every day in training, pushing just that little bit harder believing that my extra rep in the gym or interval on the bike might really make the difference. She believed, so maybe I could too.

When it came time for the first race of the season, Lea and I hopped on our flight to Cairns, Australia. It took three connections and an airport transfer to get there, so we swapped snacks, compared notes on the latest Beyoncé album and napped until we finally touched down. When we arrived at the hotel, we were excited to be staying in condos with kitchenettes—until we saw that our condo only had one actual room. Our teammate took the upstairs bedroom, which left Lea and I sleeping in a glorified closet with two roll-away twin beds about a foot apart.

“I guess let the Olympic year begin,” Lea said, breaking into laughter. When people think about professional athletes chasing an Olympic dream, they don’t imagine roll-away beds in a closet halfway around the world.

On trips like these, Lea and I complemented each other perfectly. I have always been a planner. I want to know where I am going, how I will get there and preferably one or two places to stop for snacks along the way. Especially as a young athlete, I had a tendency to push too hard and hold on too tight to fixed outcomes and a naive idea of what discipline looked like. I wanted to be in control. Lea, on the other hand, dwells in the mystery of it all. She chooses her own path and trusts it, while always leaving a bit of room for something unexpectedly magical to happen. My parents nicknamed her “free range” because she is the type of person who needs to be able to come and go as she pleases, not one for a strict schedule or rigid plan. In some ways we balanced each other out, which made us great teammates. When we were together, things always seemed to work out.

Over that week in Australia, we spent the days riding to and from the course, analyzing every rock and root to pick our perfect lines for race day. I kept Lea on time and she made sure that in moments when I started to get too rigid or anxious, she would grab me for a walk down to the ocean or to go get ice cream. By the time race day arrived, we were both ready.

After all of these years, the race results seem to be the least important memory of this trip. I won my first U-23 World Cup and Lea suffered a few flat tires that made a great result impossible. But what I remember most is our trip back home.

Getting home from Cairns is not an easy travel day. No matter how you plan it, you will have a long layover in Sydney, so we decided to embrace it and extended ours overnight. With our focus so squarely on the racing, we hadn’t made any plans for our night in Sydney and when we finally arrived, I pulled out my phone to research the best places to eat, drink, walk—everything. We should have made reservations weeks ago, I concluded after a few moments on the New York Times 36 hours in Sydney guide.

“Let’s just wing it,” Lea said as I pored over my Google searches.

“But we only have one night! How will we know if we picked right?” I answered back.

“Okay my little planner. This will be good for you,” she said.

And just like that, we were on the subway heading toward the Sydney Harbor with no clue where we would be going once we got there. Lea knew she wanted to see the Opera house so we hopped off and went there first. I spent the walk peeking at menus and trying to find the best place to eat. Lea spent the walk telling me to relax and look at the view.

The Opera house was beautiful, unlike any building I had ever seen before. We walked around and looked out at the lights of the city and the boats out in the water. Yes, this was worth seeing, I thought. We went around to the front of the building to see who was playing and, to our surprise, saw the name of one of our favorite artists in flashing lights: Vance Joy. Vance freaking Joy was playing!

“See Lea this is why we have to plan ahead! It’s probably been sold out for months,” I said.

I thought I might as well see if there were any tickets up for resale. I got on the wifi and started searching. Ten minutes later, I was down an internet rabbit hole on a website called GumTree, which I believe to be the Australian equivalent of Craigslist. There were a few tickets listed and I started to message the sellers. A couple had decided not to go last minute and posted two tickets.

I messaged them, offering all of the cash I had been handed on the World Cup podium the day before and, to my surprise, they said yes.

“We are IN!” I shouted excitedly. “We are meeting them in the roundabout at the front of the theatre in 10 minutes.”

We ran down the steps and toward the circle, nearly sprinting with excitement. We found their car, handed them the cash and walked away with two golden tickets. We looked like little kids who had just stolen from the cookie jar and promptly went to the opera house bar to sip cocktails and celebrate. It was surreal.

Even more surreal was the concert itself. Vance Joy was as funny and talented as I had always imagined and when he started playing “Fire and The Flood,” the crowd erupted into song. Joy stopped playing and it was just us. I swear with the acoustics in that building, the crowd sounded like a choir. It was one of the most beautiful things I have ever heard.

Lea and I were being given the opportunity to travel the world and fill our lives with incredible experiences, not just as athletes but as human beings. We just had to choose to value those moments alongside the results, to hold the hard work and the joy in balance rather than in opposition. That night, as we sat in the Sydney Opera House and felt the vibrations of Vance Joy’s music moving through us, my heart sang. I wasn’t planning my next step or thinking about what was on my training schedule the next day. I just sat and savored every note.

This experience remains one of my favorite memories with Lea. In a world where so many elite athletes seem to preach sacrifice and suffering, Lea showed me how joy and adventure can be your secret weapon. Yes, of course she wanted to win and was willing to be disciplined and serious to reach her goals. As her teammate, I watched her win National Championships, World Championship medals and qualify for the U.S. Olympic Team. I saw her come back from injuries and heartbreak with grit and belief and never give up on ferociously chasing her dreams. Those results have had a huge impact on the trajectory of mountain biking in America, particularly for women.

But her legacy and impact go far beyond her desire to stand on the top step of the podium. Lea taught me that in the long run, your character will define you far more than your race results ever could. It isn’t just what she achieved, but how she achieved it that makes her the incredible mentor, friend, teammate, partner, sister and daughter that she is and will continue to be long after her time on the World Cup circuit comes to a close.

To know Lea is to know joy. She loves riding her bike so much that she can’t help but share that enthusiasm with the people around her. And, if there is anything she has taught me, it is that joy can be the unexpected ingredient to the best performances— and what makes chasing those good days on the bike, with people you love and admire, an unforgettable adventure.