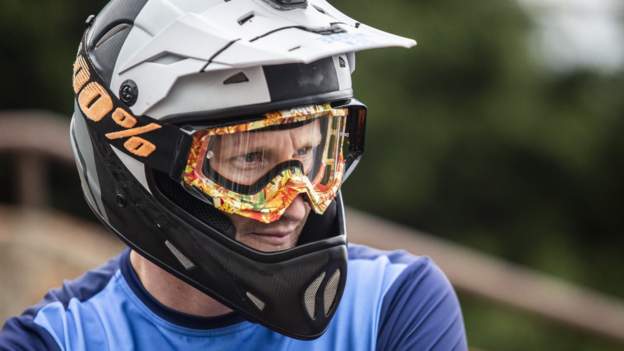 ‘We all need a rush’ – mountain biker Moore

“Some might not think these types of sports are for them,” Moore told BBC Radio Solent.

“You have to be an adrenaline seeker and a hunter who wants a thrill. Most people have that even if they don’t realise. Deep down we all need a rush.”

Moore, from Dorset, learned how to ride a mountain bike around lush woodland and a disused quarry in Poole as a young boy.

His experiences hurtling down dirt tracks and navigating unpredictable rocky landscapes ignited his passion for the sport and racing.

“Like a lot of kids I just used to BMX with my friends and see how far I could jump and things just escalated from there,” he said.

“It kind of spiralled out of control in a very good way for me.”

The urban downhill specialist – a form of racing in which competitors ride individually and are timed from start to finish, with the fastest time winning – relocated from Dorset to live in Alicante in Spain, where he rides down mountains every day.

On average he races about 10 events a year and has finished on the podium twice in 2022 as the season draws to a close.

Like any sport that requires you to race at high speed, over all types of obstacles, with little protection but a helmet and a few well-placed pads, the risk of injury is high.

But that does not put Moore off competing on some of the world’s most brutal courses.

“I know a lot of staff at Poole Hospital very well,” Moore said.

“From the age of five or six I was in there with my head split open for the first time. I’ve broken almost everything in my body.

“The last injury I had was a couple of years ago, so you could say, statistically, I’m due a big one.

“When it goes wrong you just have to accept it’s part of the sport.”

Moore had one of his best results at one of downhill MTB’s most iconic races, Megavalanche at Alpe d’Huez in the French Alps.

It is an annual race down a ski slope and the first man or woman to the bottom wins.

“It starts on a black run glacier that’s covered in ice even in the summer,” Moore said.

“Everyone lines up on the start grid and it’s shoulder-to-shoulder at about 100km an hour.

“The conditions were strange this year probably due to global warming – we had snow and then patches of exposed rock at the start.

“I tucked myself away at the back to try to stay out of trouble. But when they said ‘go’ people were so terrified they didn’t move and I went straight to the front and flew down the mountain and ended up on the podium.”

Moore, who is due to switch his main sponsor and team from Orange Factory Racing, wants to help bring through a new generation of riders – specifically youngsters who may not be able to support their own MTB ambitions.

“I just love going fast on a bicycle and I’ve been so lucky to race all over the world,” he added. “I’m at the age now where I’ve done a lot and I want to pass my experience on.

“I never had anything handed to me on a plate. I did odd jobs, like car washing, around the neighbourhood to earn enough money for my first bike as a kid.

“A personal goal is to try and help open the doors for youngsters who want to do this sport and give more people the opportunity to get into the same situation as me.

“If I can inspire someone through my social media and bring just one person into the sport who hasn’t had the opportunity laid out for them, I’ll feel like that’s a huge success.”

2 thoughts on “‘We all need a rush’ – mountain biker Moore”