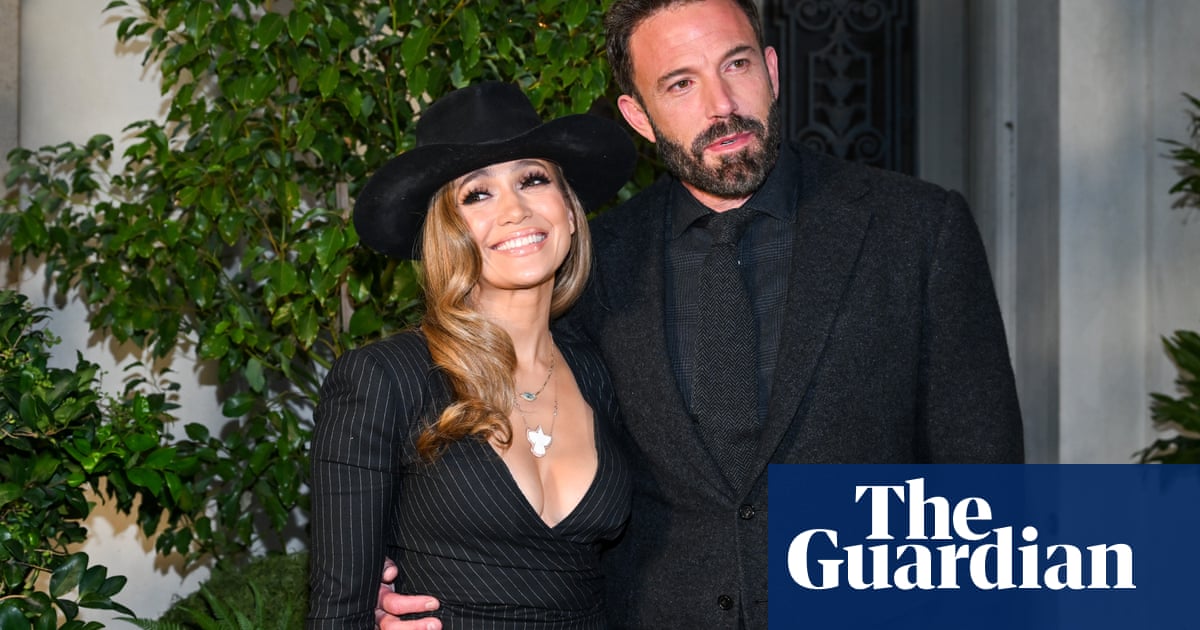 Ben Affleck wore a dark suit, while his wife, Jennifer Lopez, chose a pinstripe dress. Laura Dern was in black tie, while Sylvester Stallone was in a smoothly brushed suede jacket.

On the eve of his 83rd birthday, the Bronx-born Ralph Lauren, who is in his seventh decade as a designer, staged his first ever catwalk show on the west coast of the US, in the gardens of the Huntington Library in California, and Hollywood dressed up for the event.

For founder Lauren, who remains the chief creative officer and the company’s largest shareholder, the event marked a move to become “the leading luxury lifestyle company in the world”, according to the CEO, Patrice Louvet, who described Lauren as “so much more than a fashion designer … actually closer to a movie director”.

Waiting staff noted that the take-up of the tequila-based margarita cocktails outnumbered champagne flutes, traditionally preferred by the fashion industry in New York and Paris, by two to one.

The opulent event is part of a growing relevance of classic brands among younger consumers. A combination of sustainability considerations and the rising cost of living are driving shoppers towards choosing “investment” buys that will hold their own in the growing resale market, rather than spending on disposable fashion.

Resale has long been big business at the top end of fashion, with the Hermès Birkin and the Chanel 2.55 handbags mostly retaining their shop-floor value at second and subsequent sales. But now standard-income fashion consumers, without access to £5,000 handbags, are considering an eventual return on a £100 jacket instead. The proven longevity of Ralph Lauren and other haute-casual names is bringing the classic brands of late 20th-century fashion back into style.

With this in mind, Lauren’s California debut doubled down on the classics, but with a wink to modernity. To remind audiences that back in 1977, with Diane Keaton, he delivered a masterclass in gender-fluid tailoring – a half century before the likes of Harry Styles and Timothée Chalamet – he dressed male and female models alike in silk blouses and Bermuda shorts, double-breasted blazers and cowboy boots. The party in the Hollywood hills marked a milestone for Lauren, who aged 16 changed his name from Lifshitz to Lauren – borrowing the name from Lauren Bacall, a fellow New Yorker of Jewish heritage.

This was the second of two fashion spectacles with which Ralph Lauren has reasserted his stature in American fashion this year, after a three-year absence from the catwalk. In March, the designer’s New York apartment was recreated within the city’s Museum of Modern Art.

This week, the brand announced a partnership with the US Cotton Trust Protocol which it claims will help the company achieve its commitment to use 100% sustainable cotton by 2025. Conventionally grown cotton has a heavy carbon footprint, due to high water consumption, degradation of soil, and the use of harmful chemicals. The Trust Protocol partners with 1,000 cotton farmers for better practices across soil carbon, water management, and energy efficiency.

But despite striving for improvements in the cotton farming process, Ralph Lauren is also aiming to continue to produce more clothes, in an industry where overproduction is the prime environmental issue.

The California event was the finale of an impromptu fifth fashion week in the catwalk season. The designers Roksanda Ilinčić and Raf Simons, whose shows were postponed due to the Queen’s funeral falling during London fashion week, joined Alexander McQueen in holding their catwalk events during London’s Frieze art fair this week.

“Things happen that are much bigger and more important than fashion shows,” said Ilinčić of the disruption. Despite the postponement, her show retained an elegiac quality. Held in the artist Theaster Gates’s Black Chapel at the Serpentine Gallery, an installation that Gates has described as a tribute to his late father, the show was dedicated by Ilinčić to the memory of her own father.

Alexander McQueen’s catwalk show was staged in a Greenwich courtyard, under the same plastic bubble first erected for a show atop an east London car park last year. The brand has constructed the moveable tent that can turn any outdoor location into a venue without the environmental waste of temporary set building. But the show’s fashion headlines were stolen by the return of the ultra-low rise trousers which caused a furore when the house’s founder, Lee McQueen, first showed them in 1993.