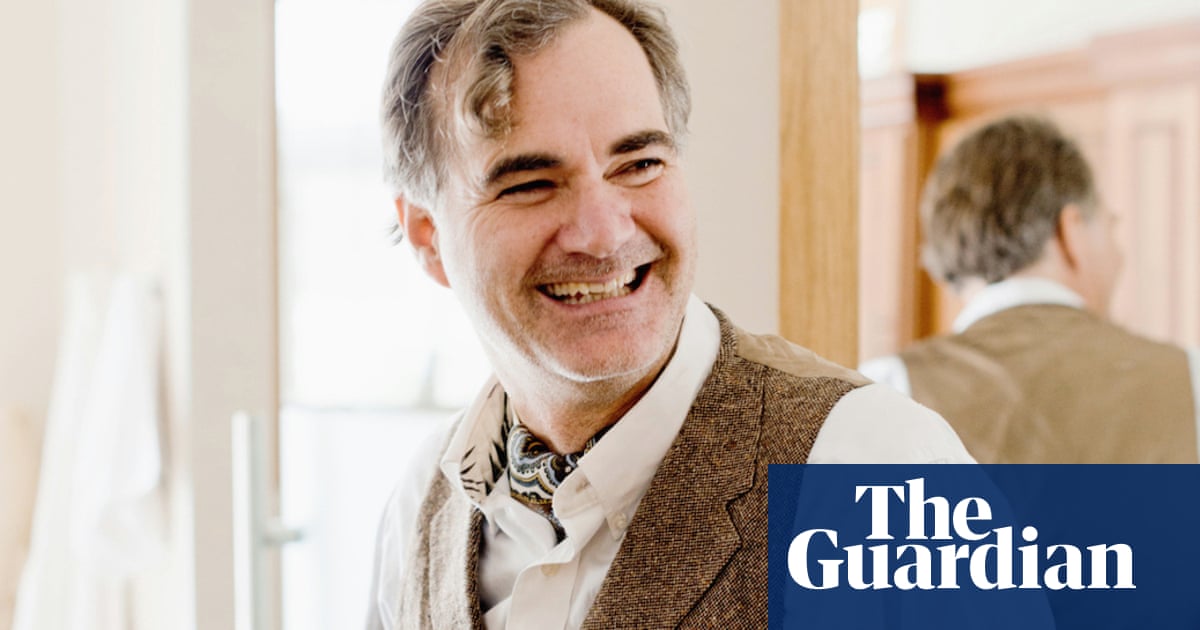 ‘The fashion gods have been good to us’: Steven Bethell, founder of Beyond Retro

‘There’s nothing wrong with a man-brooch,” says Steven Bethell, the co-founder of the vintage clothing empire Beyond Retro, pointing to the 19th-century accessory fixed to his breast pocket. It’s in the shape of a beetle with golden legs poking out from its gem-encrusted body, a big trend in Victorian Britain. “I feel incomplete if I’m not wearing a brooch,” he says when we meet at a coffee shop close to the newest Beyond Retro in Coal Drops Yard in King’s Cross, in the heart of London.

With 15 shops in London, Brighton, Bristol and Sweden, plus the first Finnish branch opening this month, Beyond Retro was flying the secondhand flag long before sustainability became a buzzword. Still, 20 years after Bethell and his wife, Helene Carter-Bethell, opened the firstshop on Cheshire Street, just off Brick Lane in Shoreditch, east London, it remains the blueprint for affordable, beautifully curated secondhand clothing. Bethell says the average price point for, say, a faux-fur coat or 60s shift dress is still about £20.

As a teenager, I would spend weekends there, rifling through piles of high-waisted jeans, peep-toe shoes, cat’s-eye sunglasses and endless tea dresses in the hope of picking up a secondhand gem on a Saturday-job budget. I still have an oversized green woollen cardigan and a high-waisted red suede miniskirt bought in that era, both still wearable thanks to the enduring quality of so much vintage stock.

There were other vintage stores – Rokit, Absolute Vintage, etc – but Beyond Retro’s canary yellow (recycled) plastic bags branded with its tattoo-inspired anchor logo – now swapped for brown paper versions, of course – had a certain cachet. My generation’s indie idols, such as Carl Barât and Alexa Chung, were said to shop there, and bands would play live in store. From trilby hats and peter pan collars to breton tops, skinny scarves and faux-fur coats, 00s Shoreditch was to my generation what King’s Road, Chelsea, was to the 60s.

“There wasn’t any grand plan to create a Beyond Retro aesthetic,” says Bethell, 53. “It was just a celebration of things that we loved.” Part of the appeal of vintage pieces is that no two items are the same. “We’re not all Steve Jobs and only wear black turtlenecks,” he says.

As luck would have it, this 00s aesthetic has undergone a revival thanks to generation Z’s fascination with so-called “indie sleaze” – Vogue describes it as “a messy amalgam of 90s grunge and 80s opulence”. There are Instagram and TikTok accounts dedicated to documenting the shop’s raggedy band T-shirts, skinny jeans and ballet pumps worn by Amy Winehouse and Agyness Deyn in the early to mid-00s.

“The fashion gods have been really good to us,” says Bethell, of the revival. Having sold umpteen tea dresses, Bethell describes dungarees as an evergreen product and says the school blazer is “the thing people can’t get enough of right now. Over the last two decades, so much has changed but so much has stayed the same.”

Other vintage retailers were never Beyond Retro’s competition anyway, he says. It was “the high-street guys” they were always up against (online sales in the UK are predicted to account for just 20% of its revenue next year). In March this year, Beyond Retro opened a store in Westfield White City, west London. Was he worried that expanding into a bright, shiny shopping mall alongside fast fashion retailers might muddy Beyond Retro’s reputation for authenticity, not to mention its sustainability objectives?

“I’ve got to admit, when you look across and there’s Victoria’s Secret, you think: this is a long way from Shoreditch,” he says. “But I think that the big challenge in life is being able to be open to new people and new perspectives. What can we do that the high street can’t? We can pick products that are relevant and emotive. We have a team that is out looking at the trends and thinking about how we can interpret them through vintage clothes.”

The secondhand market has grown in recent years – and is expected to grow 16 times faster than the retail industry by 2026, reaching a value of $84bn by 2030 – partly due to people shopping sustainably.

Beyond Retro is part of that – but what do sustainable fashion fans make of Bethell’s recent involvement with Kourtney Kardashian’s capsule collection for the fast fashion juggernaut BooHoo? He was asked to advise the reality TV star about sustainability and is listed as an independent expert on the BooHoo website, but the venture was widely accused of greenwashing.

“I didn’t know who she was,” says Bethell. “But I was like, ‘Hell, I’ll talk to anybody about what we’re trying to achieve and why we should try and achieve it.’ She has 190m followers on Instagram” – Bethell has a modest 1,245 by comparison. “I looked at it as, if I can talk to her with passion, maybe somebody in her audience will pick up on it.”

When I ask if she seemed interested and amenable to his advice, he relays an anecdote about her security entourage. “The real success of that whole thing was not the collection, but that there were a ton of headlines about sustainability,” he says, finally.

While much of the high street has struggled to thrive, especially since the pandemic, Beyond Retro has opened five stores in the last 12 months. It is also part of a far wider used-clothing enterprise – one that has doubtless benefited from the vogue for upcycling – the practice of turning one item of clothing into something else – rather than simply “preloved” fashion.

A self-confessed “vintage geek”, Bethell became interested in clothing after his grandmother knitted him a traditional Canadian Cowichan sweater – “like the one in the Big Lebowski” when he was 12. He launched the parent company Bank and Vogue in 1992, whichbuys clothes (and some other used goods) that have been donated to charity, but which charities (largely in the US) are unable to sell themselves. Much is resold within the secondhand markets of Africa and Central America, while pieces that are unfit for resale are shredded or recycled for use as rags or “wipers”. Other items are used to create new materials via Bank and Vogue’s partnership with a textile-to-textile recycling company, Renewcell, or upcycled as part of a Beyond Retro collaboration (it is working on its sixth collaboration with the shoe brand Converse, for example, with discarded material used for the uppers on a line of classic Chuck 70s).

“Beyond Retro is curated,” Bethell explains. “Two out of every 100 garments that we buy are sold in those stores.” In September this year, the company also launched a sister venture, Beyond Remade, which “takes recycled materials such as denim, duck canvas or suede” and uses them to create new items “inspired by vintage classics” in-house. At a higher cost than Beyond Retro – these pieces, which will probably appeal to a slightly older, Kinfolk-ish consumer, are to be sold direct to the consumer, rather than in shops. Today, Bethell is sporting the tan “barn jacket” from the new line.

The look of Beyond Remade is inspired by Bethell’s own lifestyle. He and his partner, who live off-grid in Canada, have long grown their own vegetables – “tomatoes, turnips, about 1,000lbs of potatoes” – and, this summer, invested in a farm with the goal of rewilding 75% of it. “It’s really fun to have grown a medium-sized business, but you also have to be honest about the fact that the business itself – even though we generate a 10th of the carbon footprint of new clothing – we do still generate something,” he says. “The whole project of rewilding is creating a carbon sink for our business.” A carbon sink is anything that absorbs more carbon from the atmosphere than it releases. “My hope is that this clothing can be worn as the uniform of rewilders,” he says.

It’s true that, fast or not, the fashion industry has a negative reputation when it comes to sustainability, but Bethell remains hopeful. He is, as the Beyond Retro website states, “on a mission to change the way we view waste”, with secondhand clothing playing a key role in building a circular economy. It’s also the reason he is not worried that online shopping will come for vintage stores the way it has for other fashion retailers, despite the proliferation of resale sites such as Vinted, Vestiaire Collective, eBay and Depop.

For Bethell, collaboration and likemindedness across the secondhand market is key. “I’m reading Regeneration: Ending the Climate Crisis in One Generation [by Paul Hawke] and I believe, as this book puts it, that healthy ecosystems generate healthy ecosystems. You can’t have a beech tree that stands by itself because they communicate among themselves – they fucking talk to each other! – and I believe our trade is very indicative of that. We are not just Beyond Retro, we are within an ecosystem of charity shops and Depops and eBays. And success is not about the Darwinian conquering of somebody else through strength, but it’s the interconnectivity of an organism in society.”

After 20 years, Bethell’s obsession with vintage clothing shows no sign of waning. In spring, Beyond Retro launched a buyback programme, “so that people can walk in and say: ‘Hey, I’m done with this sweater,’ and they’ll get 40% of the retail price”. It’s just one of the ways in which he hopes to “close the loop on fashion waste” and avoid sending items to landfill.

“Fashion has the ability to inspire change in a society,” he says, resolutely. “One thing I said to Kourtney was: ‘I believe change is possible – it’s just work. It’s hard work – it’s a lot easier to use other materials – but it’s just work.’ So my future is work. That, and being on our apple farm, planting trees.”