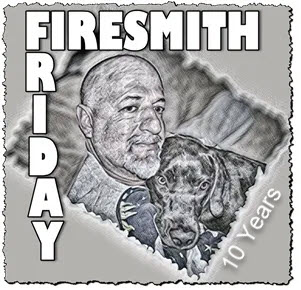 Friday Firesmith – A Time to Dry

I’ve drank 12 beers in the last two plus months, and not drinking has made a difference in my life. I sleep better without alcohol, it’s easier to lose weight, and my energy level is up. Of course, I’m eating better, and working out almost every day, so there is that, too. But there is no one magic bullet to better health. It’s a process, as most things are.

When I peaked out at 183 pounds, I was running out of clothes. I had bought a couple of pairs of cheap jeans that had 34 inch waists on them, but my 33’s and 32’s were way too tight. 34’s were heading in that direction. I looked puffy and felt sluggish all the time.

I cut out all junk food, beer, and started eating kale. I dropped five pounds quickly. Ten pounds went down in the first three weeks, and now the scales seem happy to hang around between 168 and 170 pounds. My 32’s fit again.

The first surprise at losing weight and talking about it on social media is how many people out there get sarcastic and defensive when it comes to other people’s successes. I’ve always been supportive of my online friends, and would never dream of telling someone they shouldn’t talk about losing weight because there are some people who can’t seem to do it.

I had a woman tell me that bragging about weight loss was hurtful. I wasn’t bragging. I was relating the happenings of my life on a day to day basis, and hopefully, inspiring others who are trying to reach their own goals. Those people who understand this gathered to share their stories. We talked health while the others complained.

Potato chips, potatoes in general, mac and cheese, pasta, bread, and a host of other beloved foods are gone now. I’m doing Yoga three times a week, I’m running and walking, lifting weights, and taking cardio classes. I’m training to run a 5K. This is hard work for me. The fact that I have the time to do this is the function of twenty-seven years of my life working on the road.

I don’t have to be quiet about my accomplishments. I hope they are an inspiration.

But alcohol. It was easier to stop drinking than I thought it would be. I drink during football games now, if I plan to watch the whole game, and that’s about it. If you have a drinking problem, and I mean a serious one, seek help rather than trying to cowboy it out. Understand why you were drinking when you were. But find someone who knows what they’re talking about.

I’ve been drinking since 1973, when I was thirteen years old. Almost every important event in my life included alcohol, and some of the worst moments of my life were alcohol related incidents. The idea that I might simply walk away from it, possibly forever, has an appeal that has never been there before. It’s time, I think.

I suspect there will be, always will be, those people who want to argue this, or tell me if I have to talk about it I’m not going to really do it, and that’s okay.

This may or may not inspire you, and that, too, is okay. It’s just what’s happening to me, right now.

Mike writes regularly at his site:  The Hickory Head Hermit.

Opinions expressed in this article are not necessarily those of the management of this site.