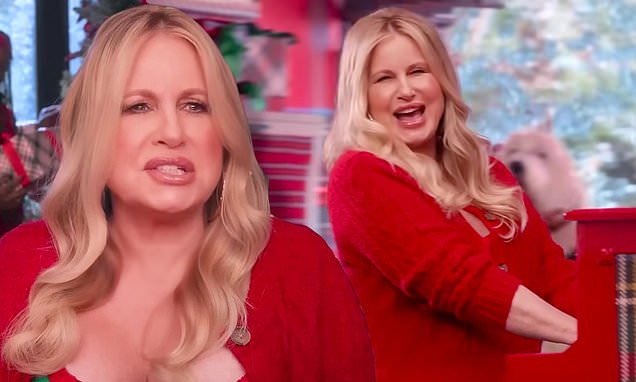 Jennifer Coolidge has ushered in the Christmas season with a new holiday-themed Old Navy ad where she sings and plays the piano.

The 61-year-old is enjoying a career renaissance from her Emmy-winning performance in The White Lotus, which premiered its second season Sunday.

Now in her new Old Navy commercial, she turned on the charm while modeling a themed red and green outfit and sitting on a rolling piano.

The piano, which featured a tartan print, glided through a stage set of families opening presents on Christmas morning.

Everyone in the scene other than Jennifer was dressed in tartan, and the pattern was also heavily featured in the decor.

”Tis the season to hashtag match,’ she sang to the tune of Deck The Halls: ‘You took it really far, lar-lar-lar-lar.’

Looking around in confusion at all the people wearing tartan clothes, she said; ‘Hey, is this hashtag twinning? Is that what this is?’

As the piano finally stopped, she pulled her signature pout at the camera and cheerfully sang: ‘Hashtag sorry not sorry!’

Her latest advertisement comes after Jennifer covered DuJour magazine and candidly expounded on her jaded view of Hollywood after three decades.

‘I had grand thoughts. Massive. I thought I could come from my little town and have a lead in something like Pretty Woman,’ she said of her early years in entertainment.

‘I remember seeing that movie, thinking, I want that for myself. I truly believe you have to have insane thoughts like that to do well in this business.’

She dished: ‘But I worked with a lot of people and those beliefs got squashed, and I didn’t try for anything bigger. There are a lot of people that can really rain on your parade sometimes, and I haven’t been given a lot of chances.’

The American Pie and Legally Blonde star reflected: ‘I started to think, I’m really not going to be anything more than the third prostitute that gets turned down by the hideous cowboy at the brothel, which was one of my [early] parts. And I had to buy the airline ticket [to fly to set] in San Francisco myself.’

Jennifer was so overwhelmed when she finally won her Emmy that ‘I was in a state of shock, I couldn’t remember my own name.’

She ‘felt like I was having a full-on anxiety attack’ and found it ’embarrassing that I didn’t whip out everyone’s name, but I didn’t expect to be up there. I was swelling up inside this dress, and I think I was having an allergic reaction.’

Said she: ‘For all these years of not thinking something like this would ever come, it was all one big inarticulate moment. I’ve been around a long time, and I think my odds for this moment were pretty slim.’

She insisted: ‘I thought there was no way that I was going to win the Emmy, even a second before it was announced….I didn’t expect it at all. Maybe that’s why I got it.’

Mike Judge initially created The White Lotus as a miniseries, but the show became such a runaway success it has been brought back as an anthology.

Although Jennifer and Jon Gries are returning from season one, the new season contains a slew of new cast members including Aubrey Plaza, Tom Hollander, F. Murray Abraham, Michael Imperioli and Theo James.