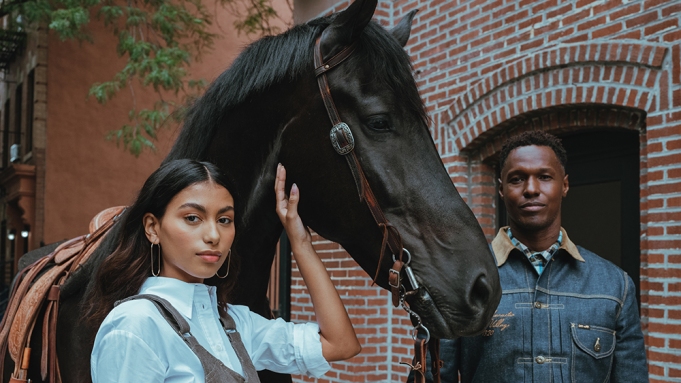 Ouigi Theodore, the founder and creative director of the Brooklyn Circus, has built his brand around storytelling. For most of its history, that’s been a story about workwear, prep and mid-century sportswear. But through a new collaboration with Lee, Theodore and his label are tackling another genre steeped in Americana—Western wear—and drawing inspiration from the legacy of Black cowboys.

The collection, which includes styles for men and women and is available online now at lee.com and the Brooklyn Circus’s website, takes design cues from the denim maker’s extensive archives. Highlights include a Cowboy jacket adapted from the design of a 1930s original; Cowboy jeans based on a pair introduced in 1925; and “Whizit” zip overalls that hearken back to the early 1900s.

However, this is not a case of copy-and-paste. Theodore’s point-of-view can be felt in the choice of fabrics like left-hand selvedge denim, and design details that include embroidery, custom flannel lining and brand-specific copper hardware.

What’s destined to be perhaps the collaboration’s most sought-after piece is a unisex Varsity jacket that features a Melton wool torso, leather sleeves, and an embroidered design on the back depicting a Black cowboy in mid-gallop (the motif is repeated elsewhere on a graphic hoodie and sweatshirt).

“Lee has built a legacy of sharing and telling Western stories by making clothes that support the lifestyle. We, on the other hand, are building our legacy by sharing our stories and our history in its purest form,” Theodore tells Robb Report, when asked about the collection’s influences.

“Every stitch, concept or collection is an opportunity to share a history that runs so deep that I don’t think there is ever a shortage of inspiration to pull from,” he adds.

Lee’s decision to partner with the Brooklyn Circus is not a bolt from the blue. Sedgwick Cole Jr., its global director of men’s design, has known Theodore for more than a decade, and previously worked at the Brooklyn Circus, where he sold vintage Lee pieces.

“When I began working at Lee, I knew this collaboration could be something special,” he says of the partnership’s origins. “Lee can tap into different cultures because we were there in real-time. Ouigi and the Brooklyn Circus appreciate that rich history. That dual respect comes through in the concepting and design of these pieces. It’s a blend of both brands.”

And thanks to the team-up, an oft-overlooked piece of American history can now be better told—and worn.

The White Lotus Is Weaponizing Male Nudity in Season 2