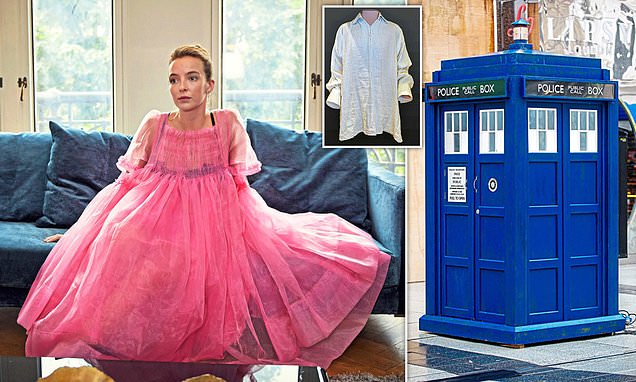 Welcome to the BBC’s virtual museum. The whole history of British radio and television is on display… you just have to use your imagination a little.

To celebrate the centenary of the BBC, which made its first broadcast on 14 November 1922, Auntie’s archivists have put together 100 objects that tell the story of the corporation.

The twist is that although all these items do actually exist, they are not all in one place… except, of course, on the internet.

As the BBC marks its centenary with a special week of programmes, including tribute editions of favourites such as Antiques Roadshow, Strictly and The Repair Shop as well as one off specials from the likes of Harry Enfield, the Horrible Histories team and Konnie Huq, the Head of BBC History Robert Seatter guides us through some of his favourite exhibits…

This is one of the special director’s passes that allowed backstage access at Live Aid in 1985. ‘Live Aid brought the world together and transformed humanitarian fundraising,’ says Robert Seatter.

‘Because it was set up so quickly, the logistics involved a lot of high-speed decisions. This one pass was shared between directors, and the guy who took it home said the concert was one of the proudest moments of his life.’

Also in the exhibition is The Beatles’ single All You Need Is Love. During the Summer Of Love in 1967, at the height of the Vietnam War, an international broadcasting project called Our World was launched.

It was the first live global satellite link-up and it brought all the continents together, with 18 countries showcasing their cultures and 24 tuning in to listen. The BBC turned to The Beatles, who performed All You Need Is Love for the first time, with a little help from friends such as Mick Jagger, Marianne Faithfull and Eric Clapton… and an entire decade was encapsulated in a song.

THE SEXIEST SHIRT EVER SEEN ON TV

The BBC has adapted Pride And Prejudice five times, but one scene changed costume drama forever. In the 1995 adaptation by Andrew Davies, hero Mr Darcy was originally meant to emerge from the lake naked.

Colin Firth objected, so a linen shirt was provided as a compromise – and millions of female viewers swooned. It was designed by Dinah Collins to be accurate for the period, but with care for how it would appear to modern viewers. Ten million of them tuned into the final episode, many of whom were unaware the lake scene doesn’t appear in the novel at all.

THE POLICE BOX THAT TRAVELLED THROUGH TIME

Doctor Who’s Tardis is recognised all over the world – and probably all over the galaxy. The design was once familiar for a quite different reason – police boxes like these were commonplace on British streets as a shelter for bobbies on the beat, and contained a phone so the public could call the force for assistance.

The exterior of the Doctor’s Tardis has been modified over the years. The original version, used by William Hartnell from 1963, included a St John’s Ambulance logo on the right-hand door, just like the real police boxes.

The interior, meanwhile, reflects a changing Britain. When the show launched in the ‘white heat of technology’ era of the 1960s, the console was sleek and minimalist.

By the Peter Davison years of the early 1980s, the Tardis looked like a budget disco. And when Matt Smith became the youngest Doctor in 2010 the trend was for ‘shabby chic’ – old typewriters, swivel chairs and other junk.

Bulgarian broadcaster Georgi Markov was on his way to the BBC’s World Service studios in September 1978 when, walking across Waterloo Bridge, he felt a sharp jab in his thigh. A passer-by had stabbed the tip of his umbrella into Markov’s leg, before hailing a taxi and leaving the writer limping in pain.

Markov, well-known for his acerbic attacks on Bulgaria’s corrupt Communist leadership, later collapsed with a fever and by the end of the week he was dead. The umbrella’s tip contained a minute capsule of ricin, a poison with no antidote.

His murder was a grim reminder of the risks faced by BBC reporters all over the world.

Like a gigantic choc ice on a stand, the AXBT was the broadcaster’s choice of microphone for 25 years, before and after the war. The fourth generation of a model made by Marconi, as well as focusing on the speaker’s voice and cutting out peripheral noise from the sides, it simply looks right.

It became a symbol of trustworthy news coverage and analysis, having been used to broadcast some of the most extraordinary moments in history.

Football commentator John Motson’s voice is one of the most recognisable sounds of Britain’s national game, but the archivists didn’t want to use a disembodied recording. So they picked one of his trademark sheepskin coats instead.

Motty owned many during his 40- year career and the last cost £2,000 in 2018 from Hide’s Couture near his home in Hertfordshire.

‘People think the BBC pay for them but they don’t,’ he’s said. The sheepskin was invaluable at an FA Cup tie in 1990, when Motty recorded a pitchside piece in a blizzard.

The game was postponed – maybe the players should have worn sheepskins and got on with it.