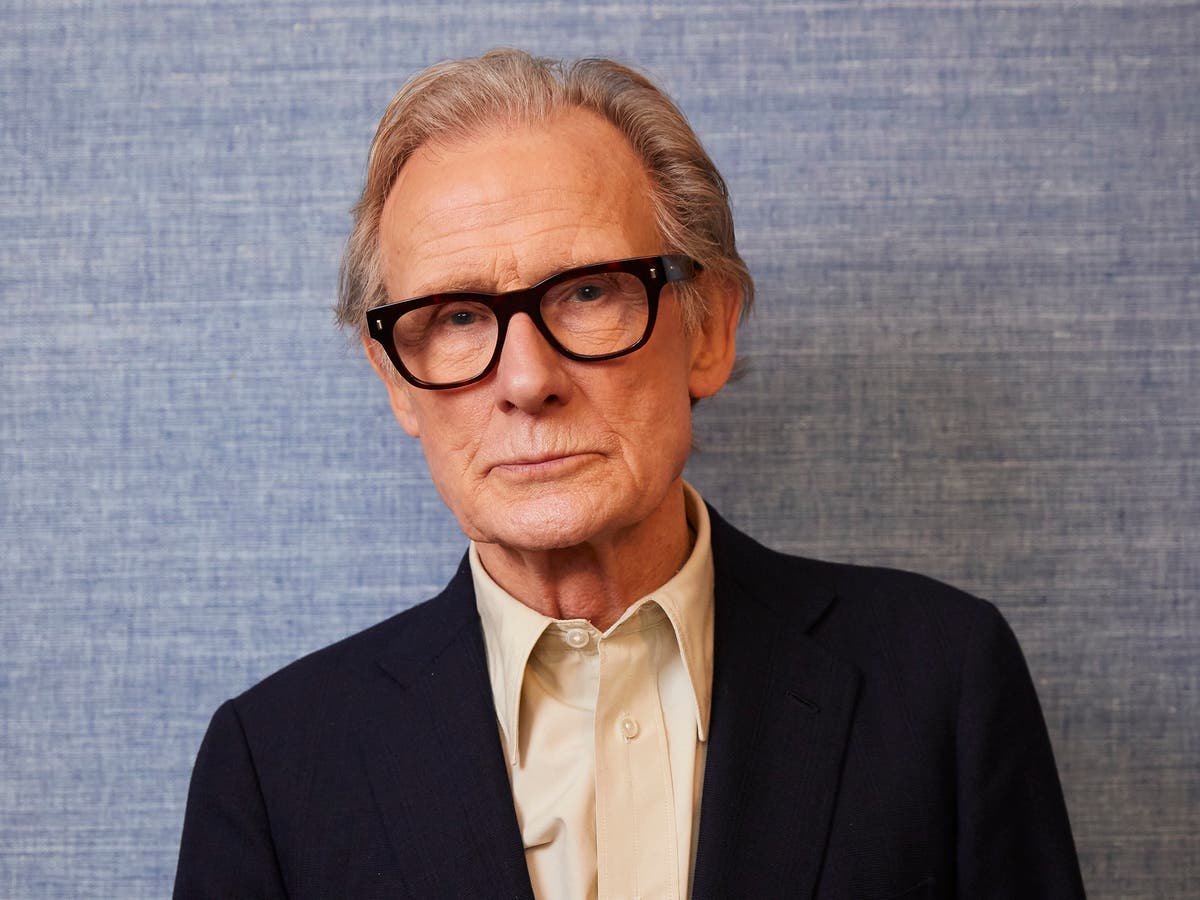 Bill Nighy loves a good suit. Everyone knows that. It’s why there is little surprise in seeing him this afternoon sharply clad in a navy ensemble too dapper to be off-the-peg. It’s also why the actor’s sartorial style, already the topic of many an interview over the past two decades, comes low on the agenda of today’s conversation – and why then in our limited time, I can’t follow up when Nighy, as he walks me to the door, picks up the recorder, holds it to his mouth like a microphone and explains his penchant for formalwear in that signature deep drawl of his: “Because I hate my body.”

It’s not something you expect to hear from the famously charming 72-year-old who in Love Actually ripped off his leather trousers to reveal what Billy Connolly once praised as his “rock’n’roll legs”. The same man who played the cocksure sea demon of Pirates of the Caribbean: Dead Man’s Chest and the fizzy time-travelling dad-of-the-year in About Time. But he has spoken about feeling uneasy in his skin before, once revealing that he showers in the dark. And coming from Nighy now, in person – who stands to pull out a seat for me when I arrive (as well as a marvellous dresser, Nighy is known as a gentleman) – the confession is more believable. Because while yes, Nighy carries himself with grace, there is also an endearing, youthful awkwardness about him. His best roles often play on that off-kilter dynamic, as in his latest film Living.

The film – a Fifties-set remake of Akira Kurosawa’s 1952 movie Ikiru – was written by Kazuo Ishiguro with Nighy in mind. He plays Mr Williams, a repressed bureaucrat who binds his every emotion in red tape. When he is diagnosed with stomach cancer and given six months to live, he attempts to do just that: to live for once in his life. The film has received stellar reviews so far, and almost all single out Nighy as a highlight. For the first time ever, he is in earshot of Oscar chatter.

There is a moment in Living where Nighy talks to himself in the mirror. He is practising telling his son and daughter-in-law of his impending death. His voice trembles like a candle in a draughty room. “It’s a bit of a bore, really,” he begins. For most of Living, Nighy plays Mr Williams as shy and sensitive, a maelstrom of feeling buttoned up in a starchy point collar, but in this moment, vulnerability peeks through. So real is the emotion on his face, it’s hard to believe Nighy isn’t imagining himself in that same situation breaking the news to his own daughter, Mary. Nighy assures me he is not. “You don’t have to feel it all,” he explains. “Acting is work – and that doesn’t diminish it in any way.”

Nighy is happily unpretentious about his profession. Summoning inner demons and invoking childhood traumas for a two-hour movie? Pssh. “If you’re in the company of anybody who suggests that an actor has to feel everything that they portray, then you’re talking to somebody who’s basically an amateur,” he says fervidly. “Often it’s a way to punish actors. I think drama teachers do it sometimes to control students. To just stand there and say, ‘You’re not feeling it.’ How do you know I’m not feeling it? What am I supposed to be feeling? You don’t have to have been bereaved in order to act somebody who’s bereaved – otherwise, well, how would we proceed? Y’know, acting is acting.”

As for method actors, he isn’t bothered by them. “It’s fine, as long as there’s no pressure put on anyone else to do it the same way. And that it’s not weaponised as a status thing, obviously. And that it’s done on your time. In other words, not on a film set or in a rehearsal room for a theatre play.” He mutters an apology for getting swept up in the topic; it is something of a pet peeve of his.

He is like this. Despite the actor’s reputation as a laconic speaker and all-round mellow fellow – a quality he once described as “jaded disco charm” – Nighy can become energetic on the right subject, however unexpected. Such as ice cream. “There is no limit to how much I can eat.” He loves strawberry but isn’t a fan of chocolate even though he loves actual chocolate. “Oh!” he exclaims when I say I feel the same. “I thought I was a weirdo.” He doesn’t mind pistachio or hazelnut. “Honeycomb!” he suddenly remembers. “There’s a restaurant I went to where they made honeycomb ice cream and that was pretty unbeatable.”

Nighy has what you might call a sweet tooth. “Sugar,” he muses. “I’m an animal when it comes to sugar. I used to eat a four-pack of Magnums and a four-pack of Soleros in one sitting.” He raises his eyebrows past his glasses frame. “That’s my relationship with sugar.” About 15 years ago, he gave up sugar and carbs entirely after noticing that he had put on a bit of weight. (He has also been sober since 1992 after struggling with substance abuse.) “I gave up cigarettes and I took up sugar. I’d never had any extra weight and when I put on a bit, it absolutely…” he widens his eyes in disbelief. “I didn’t think about anything else. I was like, ‘What the flaming hell is that?’ It wasn’t much but no one believed me because I’ve got a thin face so they go, ‘Well, you’re all right.’” It all feeds into his love of suits. “It’s basic insecurity. You’ll think, ‘At least I can look well turned out in a suit.’”

Nighy grew up the youngest of three in a flat above the garage managed by his father in south London; his mother was a psychiatric nurse. He went to an all-boys Roman Catholic school where his drama teacher (“A very nice bloke called Father Richards. We used to call him Little Richards”) encouraged him to try acting. “I was tall so I didn’t have to play girls and I had a reasonable memory so I got long-ish parts.” It was at the behest of a girlfriend (“the first girl who ever paid any attention to me”) that he applied to drama school. “I think she wrote the letter… I was the first person in our family ever to be a student. Not everybody went to university in those days, it was basically only the middle class.” On a charming side-note, Nighy recently met with Father Richards for lunch after the priest wrote him a letter, delivered together with a photograph of young Bill in a school play.

Despite a drama school education, the idea of being an actor seemed unimaginable. In the mid-Seventies, Nighy was selling women’s clothes off a stall in the Surrey Street Market in Croydon when he was called to audition for the Everyman Theatre Company in Liverpool. “It was cheesecloth summer,” Nighy recalls, standing up from his seat and swinging an invisible hem around his ankles; shoulders hunched, swaying his knees together. “We had these long cheesecloth wraparound skirts. I used to wear one in order to sell them and the man on the egg stall opposite thought I was absolutely disgusting.” When the opportunity arose to audition for Pryce, Nighy abandoned his post for a shot at starring opposite Pete Postlethwaite and Julie Walters. And lucky he did, because it was from there that “things got kind of serious”. Or at least, he smiles, “I was making some money and I didn’t have to go to a regular job, which was sort of the idea.”

As for the other R-word, he is uninterested. “I’ve never heard any good news about retirement and I have no plans to retire. I’m in a job which you can do fortunately as long as you can remain upright,” he smiles. “And well, actually you don’t have to remain upright. As long as you can deliver a line sitting down, you could probably get some kind of employment.”

After about a decade treading the boards, Nighy made his way to the screen and, in 2003, he landed the role of Billy Mack in Love Actually. On paper, the part of a washed-up pop star might pale in comparison to the romcom’s ample carriage of hunks (Hugh Grant, Colin Firth, Liam Neeson, Alan Rickman), but in Nighy’s hands, Billy was its grizzled sex symbol – and a role worthy of kickstarting a brilliant second act of Nighy’s career that is ongoing still.

The part changed his career – and his life. When Nighy recently joked that his tombstone will read, “Don’t buy drugs kids – become a pop star and they give them to you for free” there was a ring of truth to it. Funny epitaphs aside, Nighy doesn’t think of his quote-unquote legacy much. “Occasionally, I’ll think, I’ve left all this stuff lying around.” Sometimes, Nighy laughs, he’ll envision his films airing during the graveyard slot. “I used to imagine them coming on at three o’clock in the morning and people saying, ‘Who’s that guy? What’s his name? He was in that other thing.’” He doesn’t feel any resentment about this, by the way. It’s merely an observation – or rather an afterthought. “Because anyway, I won’t be there. I find it difficult to think at great length about a world in which I don’t exist. What’s that about?”

‘Living’ will be released in cinemas on 4 November