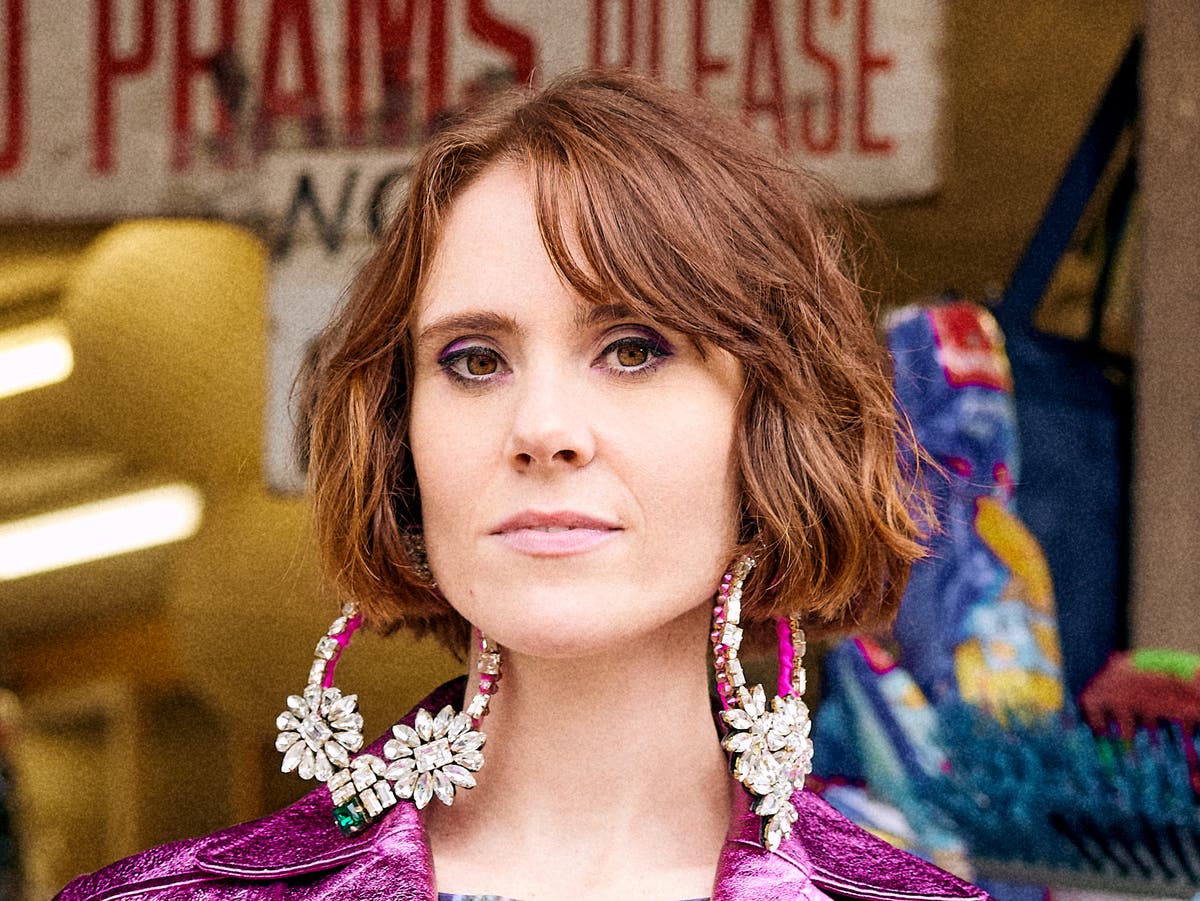 Kate Nash: ‘I don’t think you could get away now with the way people talked about me and Lily Allen’

I don’t think you could get away now with the way people talked about me and Lily Allen,” says Kate Nash. “Now, if a journalist in their thirties writes about a 19-year-old girl being fat and ugly, someone would be like, ‘What?’ But you could literally say anything in 2007.”

That was the year Nash released her hit single “Foundations”, an indelible earworm about the breakdown of a bad relationship that was rarely off the radio. There aren’t many middle eights that every British adult could still recite 15 years later, but “You said I must eat so many lemons, ’cause I am so bitter” is surely one of them. Her debut album Made of Bricks came out the same year, went to No 1, and was soon certified platinum. But Nash didn’t get an easy ride. Not only did the tabloids deride her music – it was like “Little Britain’s Vicky Pollard set to cheap synths” read an article in the Daily Mail – but they picked apart her appearance, too: her clothes, her hair, her weight.

“It was always so personal,” says the 35-year-old, speaking via video from her home in LA – where she lives with her boyfriend Thomas and their rescue dogs Vlad and Stella – a few days before the opening of her off-Broadway musical Only Gold. “I remember thinking, ‘OK, slag off my music, but why does it have to be so personal?! Like, what the f***?’” Eventually, her skin grew thicker. She realised, she says, that “what the Daily Mail have said about me is not reality”.

Besides, her teenage fans weren’t reading the tabloids. They were too busy swooning over Nash’s weird, chatty, earnest music. In that trilly Cockney voice, she sang about the usual stuff, like unrequited love and shitty boyfriends, and the not-so-usual stuff, like a girl who glued her lips together with Pritt Stick, or a girl whose best friend is a skeleton whom she sometimes dreams of smashing to pieces with a hammer.

Her most quotidien lyrics – lines such as “I use mouthwash/Sometimes I floss” – were sometimes singled out for ridicule, but such derision missed the point. This was unlofty music, sure, but it was full of wit and heart and imagination. “Gave me those pearls and I thought they were ugly/ Don’t you try and tell me that you never loved me/ I know that you did, ’cause you said it and you wrote it down,” she sang on “Merry Happy”. “I wish that you needed me,” she confessed on “Nicest Thing”. “I wish you knew when I said two sugars, actually I meant three.” Teenage girls like me had never quite heard anything of the sort. “Everything I went through in the rest of my career,” says Nash, “I’ve been able to survive it because of that record.”

And she has been through a lot. In 2010, she was dropped by her major label over text when her second album, My Best Friend Is You, didn’t reach the same heights as Made of Bricks; in 2015, she discovered she’d been defrauded by her manager, who had stolen vast sums of money and left her nearly bankrupt; in 2020, Glow, the beloved comedy-drama in which she starred, was cancelled by Netflix when she was part way through filming the fourth season.

“People feel a lot of shame when things go wrong,” says Nash. “And there’s too much shame, especially for women. We already deal with so much f***ing shame about our bodies and ageing, and all these things. That’s why it’s important to talk about it. No one’s living this perfect bullshit life where nothing goes wrong.”

The cancellation of Glow was a particular blow. Following a ragtag group of women wrestlers in the 1980s, the series was fun and charming, all bleached perms and bedazzled unitards – but it tackled serious themes, too, like misogyny, race and class, without ever feeling didactic. Critics loved it; viewers did too. But that wasn’t enough to persuade Netflix not to shut it down permanently when the pandemic hit. “I think that was very unfair,” says Nash, who played Rhonda. “All of our costumes were made and sets built. Ultimately they decided they didn’t want to pay for it. Anyway, it is what it is.”

Nash doesn’t mince her words, though she uses a lot of them. She talks quickly, as if she’s about to be cut off at any moment – “I’m Irish, like, I love to chat,” she says at one point (the middle of three sisters, she grew up in Harrow in northwest London but her mum is from Ireland). Several times I think she may have misheard my question, but then after a few minutes of roundabout musings, she comes back to what I asked.

The things she learnt on Glow, she continues, have stayed with her. “There’s something about physically slamming yourself into a mat… I mean, I can’t recommend it as a form of safe therapy,” she says, laughing, “but I tell you, the first time you do a front bump, and your whole body is in shock, that releases s*** from your body. The body keeps the score. Your body can hold some of your trauma and pain, and when you throw the fuck out of each other on a mat, some of that is going to just come out.”

The actors worked with a wrestling coach, Chavo Guerrero, and he told them things that women rarely get told. “He’d be like, ‘Be bigger. You’ve got big shoulders – use those and accentuate them. I know you’ve been told to be small your whole life but you have to shed that to become your wrestler self.’ It was so liberating. You never get told to be big and broad, and to embrace that was just so cool.”

Nash is still close with a lot of her Glow castmates, like Alison Brie and Betty Gilpin. “They embraced me in a whole new way,” she says. “There’s a lot of very ‘cool’ behaviour in music, where people are… I dunno. It’s not about community really, which is a shame. Going into a group of comedians and actresses, it was just so refreshing to be around. I’ve had the same experience with this musical.”

The musical, Only Gold, which premiered off-Broadway yesterday, has been 12 years in the making. When My Best Friend Is You came out, the choreographer and director Andy Blankenbuehler, who’s worked on productions such as In the Heights and Hamilton, got in touch with an idea. He wanted to make a musical set in Paris in the 1920s, which would follow the ruler of a fictional kingdom as he tries to marry off his daughter. Something about Nash’s music – how “poetic and funky and weird” it was, as he told The New York Times recently – spoke to him. “He wanted it to be all my music,” recalls Nash.

At the time, she had no idea what making a musical meant. The decade-and-a-bit-long process, which involved writing new songs, rearranging old ones, and being cast as the narrator, was much harder, and more rewarding, than she’d anticipated. And the collaborative world of theatre suited her. “I feel so at home here,” she says. “This is the perfect home for my music. I’ve never fit into the music industry, but I feel like I fit in here.”

Writing songs from a male perspective was particularly revelatory. “I obviously have a very female-centric voice,” she says, “and it’s been really fun to talk about power. I was like, ‘Oh wow, I understand why rappers talk about how f***ing amazing they are. Because it feels really good.’ Like, if you’re rapping about how sick you are, then you’re like, ‘Actually, I feel so good about myself right now.’”

The male characters aren’t all bluster and bravado, though. She liked thinking about their vulnerability, too, and “the pressure that men put on themselves – that the world has put on them. I think a lot about the pressures that men have put on women, but [for this] I talked to my male friends about their experiences and perspective on things.”

What kind of things? “Do you talk about sex with any men that you know?” she asks. Not often. “Girls talk about sex with their friends. Like, if a girl had a weird sexual experience, she would talk to her friends about it mostly, right?” Right. “And if men are missing out on that experience, no wonder we have the issues we face. They’re not getting to express themselves, and learn about the complexities of life through discussion.”

I suppose this will all inform her future solo music, too. She laughs. “I know, wait for my toxic masculinity album. I’m gonna be like” – she looms towards the camera with her arms up, hands clawed – “rarrrghhhh!”

Actually, she does have an album in the works, her first since 2018’s Yesterday Was Forever, though the timeline is hazy, and she’s been putting singles out whenever she fancies. “I just got rid of my manager,” she says. “It was a pandemic epiphany of being like, ‘Oh, I don’t want this.’ The more independent you become, the more you learn about what you really want. I like just being a bit flippant with songs – being like, ‘Oh f*** it, it’s not that serious, just throw out some music.’”

Her most recent single “Wasteman” – the video for which stars Danny Dyer, naturally – starts off softly, evoking some of the gentler tracks on Made of Bricks, before going full disco at the halfway point. It came out in August, and is on Spotify, like the rest of her music, though Nash isn’t a fan of the platform. Back in January, when artists like Neil Young and Joni Mitchell pulled their music from Spotify because it was streaming Joe Rogan’s misinformation-spreading podcast, “I was hoping I’d wake up the next morning and see some big younger artists would have done the same”, says Nash. “Not necessarily about Joe Rogan, but just to say, ‘Actually this company is f***ed.’ I was really hoping Taylor Swift was going to say something.”

She seems to catch herself. “Anyway. I don’t really want to make this all about Spotify because I don’t want to get punished either, but it’s not really right, is it? To pay people [less than half a penny] per stream? Then you get people who have millions of listeners and they get a couple of grand and can’t pay rent. It’s just not really right.”

It’s not just streaming services that don’t value musicians. It’s governments, too. “In the pandemic, everybody talked about how much they missed music, but as musicians we’re being told that our work is worthless. A lot of artists in the pandemic were working eight jobs, moving out of cities, not paying rent, and that’s not even that different to when they’re just not on tour. All the working class kids basically can’t afford to do this because if they’re literally getting nothing towards paying their rent, then they can’t do it. The music industry should be a place that isn’t just for the mega-successful and the super-rich. It shouldn’t be a rich playground.”

The way Nash sees it, the biggest popstars are going to have to stick their neck out if things are going to change. “Because you can want to lay down on the tracks, but if the train’s going to run over you, and everyone’s gonna be like, ‘Oh, sorry!’…” She laughs. “Then there’s no point.”

2 thoughts on “Kate Nash: ‘I don’t think you could get away now with the way people talked about me and Lily Allen’”