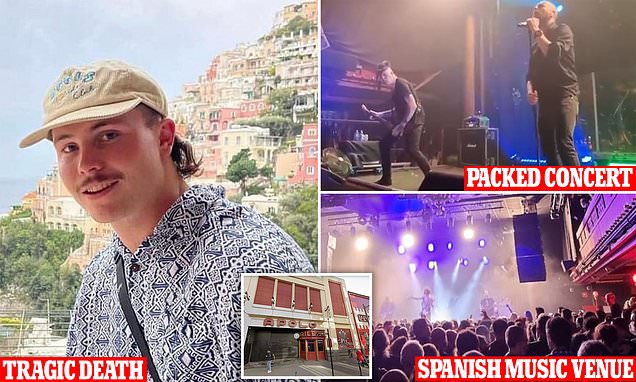 The body of a rising rugby league star who died on an end of season trip to Europe may have laid inside a Spanish music venue as hundreds of revellers packed inside to watch a concert.

In a frantic social media post on Wednesday night Australian time, Brimson said Hampson had gone missing and was last seen at 4.30am on Tuesday (Barcelona time) at the Spanish bar and music hall Sala Apolo.

Barcelona Police said a lifeless body believed to be Hampson was found at the venue about midday on Wednesday, Barcelona  time – more than 30 hours after he was last seen by his worried mates

During that period of time, music-lovers flocked to Sala Apolo to watch English band Paradise Lost perform in a concert that started at 9pm Tuesday.

Posts online show the gothic metal group playing on stage as fans standing shoulder-to-shoulder cheer from the decks below.

Despite the huge crowd, Hampson was not discovered by nightclub staff until the following day. It remains unclear where exactly in the venue his body was found.

Spanish newspaper El Mundo reported that police believe Hampson may have fallen from a height of 10 metres in a tragic accident.

Resident DJs Honey Bunny & Bass Bunny, who regularly play electronic sets at the club on Mondays, were the headline acts at the club on the night Hampson disappeared, with the event running from midnight until 5am Tuesday.

Spanish band Los Punsetes, which specialises in indie, pop, and rock, was scheduled to play at the venue on Wednesday night, Barcelona time, but it remains unclear whether the event went ahead.

The club came under fire after posting a gig advertisement on Instagram around the same time Hampson was found dead.

‘Someone just died in your club. Wtf is wrong with you people, at least f***ing acknowledge it,’ one person commented.

‘A story with condolences for the poor Australian lad would be cool. Mind Blowing,’ another said.

‘Missing for 30 hours with almost all of Australia sharing his photos to find him and this is what they post,’ a third person wrote.

Daily Mail Australia made several attempts to contact Sala Apolo on Thursday morning AEDT, but all phone calls were unanswered.

According to its website, Sala Apolo is one of the oldest dance halls in Europe, celebrating its 75th anniversary in 2018, and is a ‘national and international reference music venue’.

The venue has hosted more than 13,000 groups and 7000 DJs and producers, with big-name guests including Coldplay, Kings of Leon, and The Killers.

The building comprises of three rooms with stages – La Sala Apolo, La sala [2] de Apolo, and La sala [3] de Apolo – which can be transformed into seven clubs, with a total capacity of 2900 people.

‘[Apolo’s] origin dates back to the beginning of the 20th century and its transformation has always been linked to the transformation of Barcelona, building an important part of the DNA of the city and its people,’ the website reads.

‘Apolo is the preferred destination for the most diverse audiences, and every day of the week it hosts club sessions, concerts, cycles and other musical events.

Meanwhile, tributes have flowed for Hampson as devastated loved ones confirmed the news of his death online.

‘Waking up to the news no one wants to hear, we are devastated to find out that Liam had an accident and sadly has not survived,’ his dad Brett posted on Facebook.

‘We are heartbroken to say the least. Liam had a heart of gold and was a much loved son, brother, grandson, uncle and friend. Words can not express our grief.

‘We can not thank his mates enough for being there with Liam having the time of his life and assisting in the search for our boy. Our thoughts are with them.’

Hampson’s sister Tiarna posted a similar tribute hours after she issued a desperate appeal to find him. ‘We are so heartbroken,’ she posted.

‘Liam was the best brother I ever could of asked for and made me a better person. We cannot express our grief.

‘We cannot thank the boys he was travelling with enough for assisting with his search and made sure his last days were the best of his life.

‘Going to miss you so much, Liam.’

The family has requested privacy as they deal with the heartbreaking loss.

‘Hasn’t been able to be contacted and no one has seen him for 24 hours… was travelling with a group and very out of character, any info would be greatly appreciate,’ Brimson captioned a photo of Hampson wearing the clothes he was last seen wearing – a black t-shirt and light coloured shorts and baseball cap.

‘Please do not message me unless you have any help or info. We are busy trying to message family members etc. Thanks!’

Riki also reposted the photo with a message begging for help to find him, which was also shared by the Broncos.

‘Please help or share this [message] it’s very scary for all of us he’s our best mate we want to find him,’ Riki wrote on his Instagram.

Arthars posted a simple pray emoji on a black background on his Instagram stories.

Just two days earlier, Brimson posted one of the last photos of Hampson in front of the Eiffel Tower in Paris.

Hampson and Brimson were also teammates at the Tweed Seagulls.

The group of mates have posted dozens of photos from their adventure-packed travels in the past month, including snaps from Paris, Ibiza, Amsterdam, Munich and Positano in Italy.

Hampson played hooker for the Redcliffe Dolphins and recently helped steered his side to the Queensland Cup grand final, where they were narrowly beaten 16-10 by the Norths Devils.

The Dolphins will make their NRL debut next season under the helm of coaching legend Wayne Bennett.

Hampson is not among the club’s top tier squad.