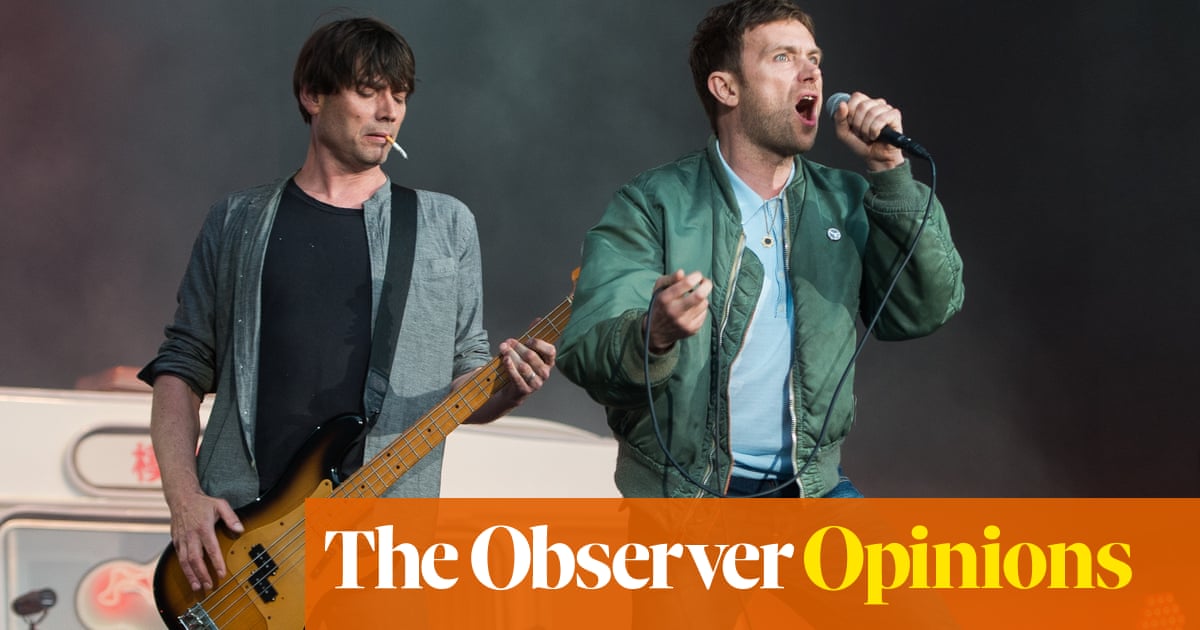 Is it my imagination or has the music industry comeback… made a comeback? Blur have announced a one-off Wembley stadium show for July 2023 and Pulp are touring next summer. Pulp are reuniting for a second time and Blur last played a full UK set at Hyde Park in 2015.

Of course, my first thought, as a reasonable person, was: is there any way of stopping this, can we call in mediators? I’ll do it if you give me a megaphone and a modest fee. My thinking was: maybe they could still be talked out of participating in this naff and historically most dreaded of music industry ritual humiliations: the comeback, reunion, call it what you will.

While many would have greeted the news with unalloyed joy, others may be wondering: what’s the point? This isn’t specifically about Blur or Pulp. An ungenerous view could be that, over the years, there’s been too much nostalgia-schmaltz tarting it around the legacy circuit. An endless parade of vintage acts creaking their way on stage for a big payday. Emboldened by needy fans who desire only to be spoon-fed their own heydays.

How are young bands supposed to compete, or even breathe, in this era of heritage-juggernauts? And, in this instance, for what? A re-blast of the 1990s that’s a pale facsimile of the real thing. A Britpop theme park that may as well feature a stage set of fabled Camden pub, The Good Mixer. The trashing of a generational legacy. The cold, corporate monetising of a shared past… But then I found myself wondering: is it this view that’s outdated?

Time was, comebacks/reunions were deemed at least controversial (Sex Pistols’ 1996 Filthy Lucre tour), if not outright wrecking balls for big reputations. Never mind that huge numbers of acclaimed acts have re-trodden the boards. Or that it’s a long-established industry gambit: it got to the point where boy bands would “split” to generate interest in a later comeback. Serious artists were wary of reunions and with good reason.

There’s a difference between bands who stay together and draw heavily on back catalogues (arguably, the Rolling Stones are in a constant state of “comeback”) and reunions put on explicitly to perform old material. Just as there’s a distinction between bands reforming as active units (with the expectation of new music) and those participating in reunions. Thus, reunions traditionally ran the risk of being perceived not only as cash-ins but also climbdowns: tantamount to an admission that the reuniting members were out of ideas. That they were no longer operating as valid musicians, but were reduced to plundering their own back catalogues, like indie-cabaret or their own tribute bands.

Put like that, you could almost get nostalgic for the old-school “scorched earth” rock’n’roll bust-ups of the past that made reunions impossible (though, of course, there’s always Oasis). Bands that split up explosively, in an unlovely detonation of “creative differences” – separate limos, lawsuits, snarling ill will – and then had the good grace to stay split up.

This would have been my purist take in my music hack days: that the vast majority of comebacks were redundant, entirely antithetic to the spirit of rock’n’roll and always – whatever the act claimed – solely financially motivated. Now I’m not so sure.

First, I’m a massive hypocrite: if Kate Bush was inspired by her Stranger Things resurgence to announce a retrospective Hounds of Love tour, I’d be banging on the door of Ticketmaster before you could cry “running up that hill”. How is this any different to audiences who fancy singing along to Disco 2000, or Song 2?

Moreover, like everything else, the reunion has evolved, as have attitudes towards it. Just do the maths: several decades of music industry equals several generations of artists who feel ready for reunions. These days, it’s accepted that a band’s “afterglow” as it were, is a perfectly valid station of their career arc.

Comebacks are normalised: planned for, sometimes even relied on and, since streaming has destroyed finances for so many, live performance is the best way for artists to go. Also, crucially, musicians no longer buy into the heritage psychodrama of humiliation and creative death; after all, here are Blur, with a snazzy one-off Wembley event, doing it their own way, bespoke-ing the concept of the reunion.

And maybe it goes deeper than that. With nostalgia a dangerous game, there will always be pros and cons to reunions. Are the likes of Blur and Pulp burnishing their legends or tarnishing them? Will Damon Albarn end up wishing he’d left his tracksuits to rot on the dressing-room hanger?

Still, many of these artists have other creative projects and don’t need to reunite, but they want to. For the craic and, perhaps, at the risk of sounding pretentious, a sense of communion. Such shows can function as a kind of victory lap, not just for the band, but also for the generation they represent.

With the music industry a savage business, leaving artists feeling like they’ve been trampled by wild horses, they could also serve as existential markings of territory for bands and fans alike: a way of saying that, at least this – the past, the music, the memory – belongs to them, no one can take that away, and they can do with it whatever they wish.