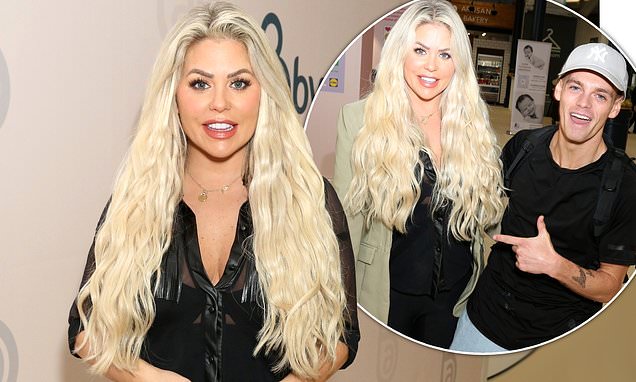 She announced she is expecting a baby in August with her partner Arron Wright.

And Bianca Gascoigne looked radiant as ever as she was pictured at the 2022 Baby Show in London on Friday night.

The daughter of football legend Paul ‘Gazza’ Gascoigne and his ex wife Sheryl, put on a glamorous display for a family afternoon out at Olympia, south west London.

Bianca wore her lengthy platinum blonde in beachy waves which she let fall loose down her shoulders.

The 36-year-old, who is 21 weeks pregnant, wore a pair of black leggings which hugged every inch of her curves.

She paired them with a sheer black blouse with leather trimming on the collar and buttons, also showcasing some of her cleavage.

Slipping her feet into a pair of brown cowboy boots, a little bit of height was added to her curvy frame as she stepped out on Friday afternoon.

The former Celebrity Big Brother star’s accessories were kept simple with a gold pendant necklace while she also wore a light palette of makeup.

She also threw a sage green blazer over her shoulders and held a Givenchy Antigona bag on her arm.

She posed with her brother Regan, 26, and her mother Sheryl, 59, who joined her at the event while she took a look at various stalls showcasing what new mums have on offer.

Bianca also posed with a pram, preparing for motherhood as she passes through halfway through her pregnancy.

The appearance comes after Bianca announced she is expecting a baby girl with her partner of one year, Arron Wright.

The couple revealed the news at a huge ‘grazing’ party with her father Paul Gascoigne and mother Sheryl.

The couple, who confirmed their romance in December 2021, have been friends for 14 years and announced in August that they were expecting a baby in February 2023.

The model put on a loved-up display with Arron at the event as they shared a smooch while celebrating with their nearest and dearest.

In a video shared to her Instagram Stories, Bianca teased fans with the caption: ‘GIRL OR BOY??’

Arron fired a pink confetti cannon to show they were expecting a girl and the happy couple then kissed one another.

Bianca also showed off a wardrobe containing designer pink baby clothes for their little girl when her is born.

The reality star announced the happy news she is expecting her first child by posing with her beau by recreating the movie posted for the 2007 comedy Knocked Up.

Alongside the fun photo, Bianca announced the bundle of joy is due in February, and wrote: ‘We’re having a baby.’

Bianca and Arron celebrated their one year anniversary on August 7 with a romantic trip to Paris.

In April, Bianca explained the pair’s path to romance, explaining they first met in Dubai in 2008 and stayed in touch over the years, before re-grouping in the ‘best relationship ever’.

Former glamour model Bianca told how the ‘universe had it planned all along’ and she and Arron had become the ‘best versions of ourselves for each other’ over the years.

Bianca previously described Arron as ‘husband material’ and said the couple had discussed marriage and having children.