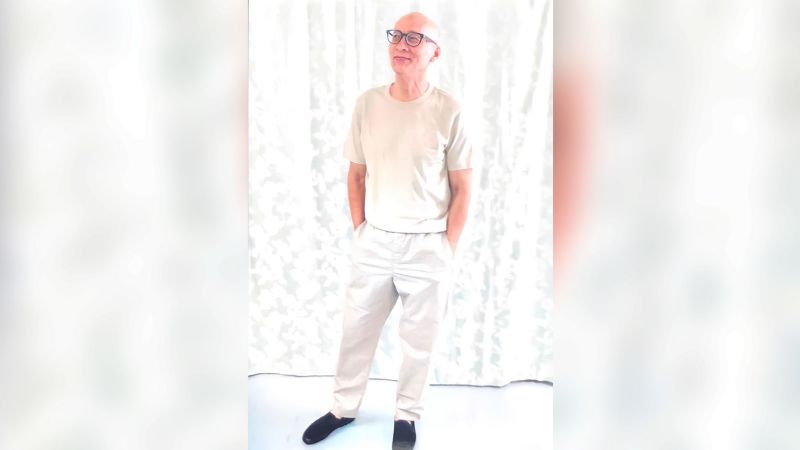 Nazira Lajim Hertslet can’t help but gush over pictures of her brother Nazeri.

“Doesn’t he look so tall and so handsome,” she said of a series of photos of the 64-year-old grandfather dressed in casual wear.

He smiles in one photo, standing tall against a white floral curtain and even comes across as playful in some shots. But this was not a happy occasion.

These were the last photos taken of Nazeri Bin Lajim before he was executed in Singapore on drugs charges in July.

Arrested in 2012 and convicted of trafficking 33.89 grams of heroin, Nazeri was hanged at dawn – the fifth of 11 inmates sent to the city-state’s gallows so far this year for drug offenses. The most recent execution was an unnamed 55-year-old Singaporean man who was hanged in early October, according to the Central Narcotics Bureau (CNB).

In a statement to CNN, the Singapore Prison Service (SPS) said it provided prisoners with “the option to have photographs taken in clothes which are sent in by their families.”

“This is done to allow family members to have recent photographs of their loved one,” SPS said. “The decision as to whether to take the photographs is purely the prisoner’s.”

Nazira said the gesture had brought her some comfort and relief in a system that has inflicted “so much pain and cruelty.”

“He looks so happy and strong – the strength it must have taken for him at that shoot.”

Singapore is adamant that capital punishment works to deter drug traffickers and must remain in place to maintain public safety. Three reports commissioned and released by the Ministry of Home Affairs (MHA) this week detailed “very strong support among Singaporeans” for the use of the death penalty for serious crimes like drug trafficking. In one study that surveyed 2,000 local respondents, more than 70% believed that executions were more effective than life imprisonment in deterring drug traffickers, the government said.

But even as authorities double down on death sentences and executions, activists have noted the increasing size and frequency of recent drug busts.

On the same day as the local man was executed, police arrested six people in two raids that netted 104 grams of ketamine, 10 LSD stamps and 2.28 kilograms of cannabis – enough cannabis to “feed the addiction of about 330 abusers for a week,” read a CNB statement.

Rocky Howe, a member of the local abolitionist movement Transformative Justice Collective (TJC), said there had been a notable increase in capital convictions, at least 10 for drug trafficking this year, based on his calculations.

“For every life lost, there will be a new trafficker,” Howe added. “We need to stop and ask if the death penalty is really working in deterring people from trafficking drugs into Singapore as the government says it does.”

Under Singapore’s Misuse of Drugs Act, anyone caught trafficking or importing or exporting certain quantities of illegal drugs receives the mandatory death sentence.

The death sentence applies to traffickers carrying methamphetamine, heroin, cocaine or cannabis products above a certain threshold. In Singapore, the threshold for heroin is 15 grams or more. In comparison, under US Federal Trafficking penalties, first-time offenders caught trafficking 100 to 999 grams of heroin face prison terms between 5 and 40 years. Longer and harsher penalties potentially apply if the dealing causes death or serious injury.

Singapore ruling party ministers say the threat of capital punishment is necessary to prevent the city-state from becoming awash with drugs in a region that’s a global hotspot for the drugs trade.

In May, the UN Office on Drugs and Crime (UNODC) saidthe “scale and reach” of the methamphetamine and synthetic drug trade in East and Southeast Asia was “staggering.” In Singapore, methamphetamine was the main drug of concern in 2021, according to a briefing notefrom the Asia and Pacific Amphetamine-Type Stimulants and Information Center (APAIC).

Seizures and use of methamphetamine dropped during that year, APAIC reported, but heroin seizures reached a record high.

Despite carrying the death penalty, large cannabis seizures are also regularly reported in Singapore. A handful of record-breaking hauls have made headlines over the past few years – the largest amounting tomore than two million Singapore dollars ($1.7 million).

In a five page statement to CNN that linked back to government backed reports and statistics, Singapore’s MHA said it would be “erroneous to draw the conclusion that drug busts indicate that trafficking rates are continuing to rise despite the death penalty being in place.”

“On the contrary, without the capital sentence, drug traffickers would be bolder, and would traffic larger quantities of drugs into Singapore,” the statement said.

Until recently, Singapore and some of its closest neighbors were united in their harsh approach towards the war on the drugs.

Rights groups believe Vietnam to be one of the region’s biggest executioners.

Executions are a state secret but in a rare report by the Ministry of Public Security made public and published on state media outlets in 2017, 429 executions were revealed to have been carried out in prisons across the country between 2013 and 2016. Current numbers on death row are also not known, rights groups say.

Following a hiatus in 2021, military-run Myanmar also carried out executions this year – that of two prominent democracy activists who were executed in July after being accused by the junta of “terrorist acts”– prompting fear and concern for those left behind bars.

But other countries have gone down different paths.

Malaysia, Singapore’s closest neighbor, took drug trafficking off its list of crimes punishable by death in 2018 and in June announced moves to abolish the mandatory death penalty.

Indonesia, which like Singapore has long executed those convicted of crimes such as terrorism, murder and drug trafficking, is now mulling plans to introduce a “probationary death penalty,” which officials say will empower judges to hand down death sentences with probationary periods of 10 years if a defendant “shows remorse” or proves that they did not play a large role in the crime committed.

However, Singapore is unlikely to budge on its approach to drugs, which has been key in safeguarding its global reputation as a thriving financial and travel hub, local experts say.

“Every country is entitled to choose how it deals with the most serious of crimes, including whether (or not) to have the death penalty,” said associate law professor Eugene Tan from the Singapore Management University. Tan, who once served as a nominated member of Singapore’s parliament, said that courts did not “hand down death sentences lightly.”

“The government’s uncompromising attitude towards drugs stems from a long standing commitment to law and order,” Tan said.

And with Singapore being a key major transport hub close to many regional drug production centers, Tan said it was “unlikely to follow in the footsteps of other countries in liberalizing drug policies.” “The Singapore government believes that the drug situation will rapidly deteriorate if it relaxes its stance as other countries have done in recent years,” he said.

UNODC’s Southeast Asia representative Jeremy Douglas told CNN in May that if Southeast Asian countries want to get on top of the drugs trade, they need to change their approach to the problem.

Governments should be treating drug use and dependency as health issues, not criminal matters, through “public health education, the provision of treatment care and support, rehabilitation and reintegration programs,” he said.

“There is also no indication that the death penalty acts as a deterrent for drug trafficking,” Douglas added.

A spokesperson for Amnesty International noted that “relatively small amounts of drugs” were usually reported in Singapore’s sentencing cases, indicating that convicted traffickers were those holding “low ranking positions in drug trafficking rings.”

That begs the question whether their deaths would “substantively disrupt the drug trade,” the spokesperson said.

But in its statement to CNN, Singapore’s MHA said “first-hand accounts” showed how many traffickers were deliberately trafficking below the legal threshold amount.

“Drug traffickers know of the capital sentence, but traffic for money,” the ministry said. “The traffickers make a cynical calculation to traffic drugs for personal gains, disregarding the thousands of lives they would destroy.”

It’s been three months since Nazeri’s life was ended.

His sister has some of his photos saved on her phone. “I look at the pictures whenever I miss him” she said.

“We didn’t ask for them to be taken but it’s still a nice gesture,” she said, adding that the family had been asked to provide outfits.

“I don’t know how this practice came about, why the pictures were taken, but it shows how (disconnected) the prison and justice system is,” she said.

“Because at the end of the day, they killed my brother.”